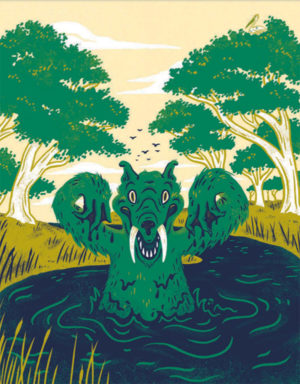 2020 Book Week – Curious Creatures, Wild Minds
Have you ever wanted to set out in search of the Bunyip?

If you’re out on a night time walkabout in Australia, be careful that you don’t stroll too close to a billabong, lest you are grabbed by the terrifying Bunyip. According to tradition of the Aboriginal people of Australia, the Bunyip is a malevolent monster that lurks in the water, waiting to pounce upon its next meal. And that meal is sometimes human. It is said that on a quiet night in the Outback, you can hear the haunting cry of the Bunyip. Even today, Aboriginal people may steer clear of billabongs when they hear mysterious calls of the wild.

Most everyone in Australia has heard of the Bunyip, and it seems quite a few people know someone who says they saw one. Yet it is often impossible to find a person who has actually caught a glimpse of one. This may be why descriptions of the Bunyip vary widely. In some tales, it is a dog-like or seal-like creature. Bunyips have been described as being big as a horse and as small as a dog. They may have flippers, fangs, tusks, one or two eyes, shaggy fur, scales, or horns. Descriptions of the animal’s behaviour also vary widely, from a man-eating monster to a timid plant-eating creature that shies away from humans.

When tales of the Bunyip reached the early European settlers of Australia, they thought it may be yet another strange new creature (like kangaroos and koalas) that they had never before encountered. Several expeditions set out on vain attempts to capture a Bunyip. One expedition in 1846 was widely reported to have returned with the skull of a Bunyip (the skull was then supposedly lost). Most experts believe the skull was likely that of a horse or cow, perhaps modified to change its appearance. Today, scientists do not believe the Bunyip actually exists. They think that reported sightings are more likely the result of imagination, misidentification of other animals, or deliberate hoaxes.

Legends of the Bunyip

Yet, legends of the Bunyip may not be all nonsense. Some investigators consider the Bunyip to be a cryptid. A cryptid is a living thing whose existence has been suggested but not demonstrated (see cryptozoology). A few experts have suggested that the Bunyip could be a Diprotodon (giant wombat), a bear-sized Australian marsupial which is believed to have gone extinct more than 30,000 years ago. The Diprotodon likely spent days wallowing in shallow billabongs. The ancestors of Aboriginal people, who arrived in Australia more than 50,000 years ago, no doubt saw and probably hunted Diprotodon. It may be that stories of the Bunyip recount memories of ancestral encounters with this prehistoric giant in the Dreamtime, an ancient time in the belief of Aboriginal people of Australia when the first beings existed and the land was created.

Discover the facts (and fiction) behind outlandish legends and unbelievable sightings in Abnormal Field Guides to Cryptic Creatures. Professor Abner Normal has all the tricks to lead readers on an educational (and unconventional) safari in search of the world’s most mysterious creatures, including the Bunyip. The light-hearted tone makes it fun to learn historical, cultural, and scientific concepts. Available in print and eBook format.

If you’re not a subscriber to World Book Online or World eBooks, try it for free via the above links. Learn more about the print set click here.