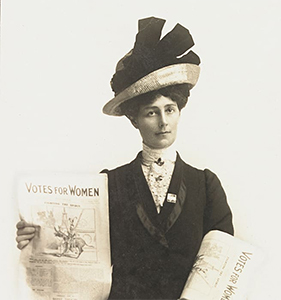 World Book continues its celebration of International Women’s Day with a look at Australian feminist (promoter of women’s rights) and campaigner for woman suffrage (voting rights) Vida Goldstein (VY duh GOHLD styn). Goldstein was instrumental in helping to win the right to vote for Australian women in 1902—the second country to grant women full voting rights after New Zealand (1893). In 1903, Goldstein became the first woman to be nominated for election to the Australian Parliament.

Vida Jane Mary Goldstein was born on April 13, 1869, in Portland, Victoria. Her parents were campaigners for social reform. The family moved to Melbourne in 1877. In 1886, Goldstein graduated from Presbyterian Ladies’ College in Melbourne.

Goldstein began her suffrage work by collecting signatures with her mother for the Women’s Suffrage Petition. The petition, signed by 30,000 women, was presented to the Parliament of Victoria in 1891. In 1899, Goldstein became an organiser for the United Council for Women’s Suffrage. From 1900 to 1905, she produced and edited the monthly feminist journal The Australian Woman’s Sphere.

The Commonwealth Franchise Act of 1902 granted all non-Aboriginal Australian women the right to vote on a national level. In 1903, Goldstein founded the Women’s Federal Political Association (later the Women’s Political Association) to educate women in political matters. She became the group’s president. In 1903, with the group’s support, Goldstein became the first woman in the British Empire to run for election to a national parliament. Although her campaign for a seat in the Senate was unsuccessful, she received nearly 51,500 votes. Goldstein ran unsuccessfully for the Australian federal Parliament four more times: in 1910 and 1917 for the Senate, and in 1913 and 1914 for the House of Representatives.

In 1909, Goldstein launched the journal, The Woman Voter. In 1911, she visited England at the invitation of the Women’s Social and Political Union and spoke to huge crowds on the suffragist cause.

Outbreak of World War I

With the outbreak of World War I (1914-1918), Goldstein shifted her attention to the pacifist movement. A pacifist is a person who is opposed to war. She campaigned against the war and conscription (compulsory military service). Goldstein became chairperson of the Australian Peace Alliance. In 1915, she cofounded the Women’s Peace Army, which mobilised women against war. In 1919, Goldstein attended the Women’s Peace Conference in Zurich, Switzerland. Afterward, Goldstein took on a less prominent role and devoted much of her time to providing counselling services. She continued to write in favour of women’s rights and in opposition to war. She died on Aug. 15, 1949, in South Yarra, a suburb of Melbourne.

To discover more about Vida Goldstein, simply login to your World Book Online, or, if you’re not a subscriber, try it for free via this link.