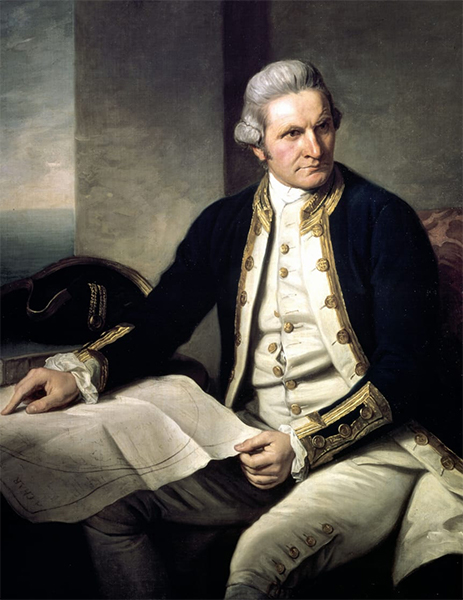 The most influential explorer of the Pacific was James Cook. Cook, a British naval officer, made three long voyages from 1768 to 1779. These voyages provided much scientific information about the waters and islands of the Pacific. The information contributed to European colonisation of Australia, New Zealand and other territories.

By the mid-1700’s, the British had become interested in the Pacific Islands as potential trading centers. In 1768, the British Admiralty appointed James Cook to sail on an expedition to Tahiti led by the British botanist Joseph Banks. The stated purpose of the journey was to observe the path of the planet Venus across the face of the sun. But in secret instructions, the British government ordered Cook to find and take possession of what it called the unknown southern continent. He did not find it. But he did explore New Zealand and the eastern coast of Australia.

James Cook was the first European to sight the part of Australia now called New South Wales. He and his crew aboard the Endeavour sailed along most of the eastern coast in 1770 and landed briefly at Botany Bay on April 29, 1770. The bay was named for the many unusual plants growing on its shores. The British planned a penal colony on the bay in the 1780’s, but moved it to Sydney Harbour. Cook gave New South Wales its name.

Cook did not understand the Aboriginal ways of land management. He assumed the Aboriginal people did not really own the country and it was therefore free for British settlement.

After surveying the bay, Cook continued northward, passing Port Jackson, where Sydney was later founded. On June 10, Cook’s ship, the Endeavour, struck a reef that was part of the Great Barrier Reef. His crew made repairs on the ship in the mouth of a river in northern Queensland that Cook later named the Endeavour. Cook reached Cape York, and on Aug. 22, 1770.

One of Cook’s great successes was preventing major outbreaks of scurvy on his voyages. Scurvy is a disease caused by a lack of vitamin C. It can be prevented by eating foods such as fresh fruits and vegetables. Because Cook fed his sailors appropriately, no one died from scurvy during the three-year voyage of the Endeavour.

Europeans used many Aboriginal words for the landforms, places, animals, and plants and helped spread their use through the continent. For example, James Cook encountered the word kangaroo in what is now Queensland in 1770. The word then spread to all parts of Australia. Learn more about Australian Aboriginal languages.

To discover more about James Cook’s explorations simply login to your World Book Online, or, if you’re not a subscriber, try it for free via this link.