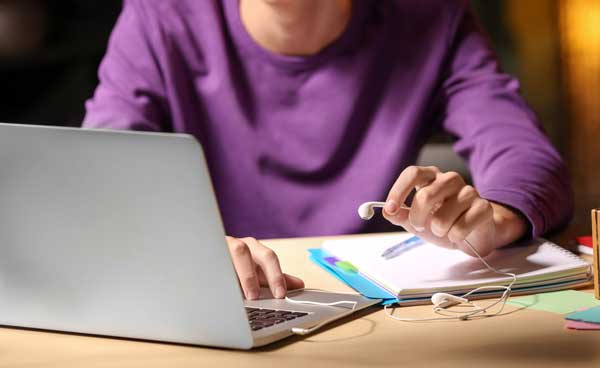 For many people, interacting with computers is an important part of daily life.

In most computers, information is encoded in bits. Each bit consists of a binary digit: 1 or 0. Computer chips simulate bits with billions of tiny electronic switches called transistors. A transistor can either switch on, for 1, or off, for 0. A string of bits provides an instruction for the computer. Machine language, the most basic computer language, allows direct communication with a computer through patterns of 1’s and 0’s.

In 1945, German engineer Konrad Zuse developed the first high-level computer language, called Plankalkül (Plan Calculus), to be used with programmable electromechanic computers. Since then, many different computer languages have been developed for different purposes and for use on different kinds of machines.

Today, computer programmers use a wide variety of languages. The language HTML (HyperText Markup Language) is used to format web pages, ensuring that a website’s words and images are displayed properly to visitors. Java is the standard language for developing smartphone apps. Python, named after the British television comedy “Monty Python’s Flying Circus,” is a flexible language used for many purposes, including website development and artificial intelligence programming. C Language is used to develop operating systems.

Quantum computers, a developing technology, use quantum physics to calculate information faster than classical computers. Rather than using simple bits, a quantum computer language uses quantum bits or qubits. A qubit can store more information than just a 1 or a 0. Its value can also be somewhere in between 1 and 0. This allows the computer to perform a massive number of computations at the same time. A true quantum computer has not yet been created, but engineers around the world are racing to complete the first models. Quantum computer languages, on the other hand, have already been developed in anticipation of “speaking” with these extraordinary machines.

To discover more about coding, simply login to your World Book Online, or, if you’re not a subscriber, try it for free via this link.